If you are having trouble starting your nitro rc car engine it can be very frustrating! There are many different reasons why a nitro engine might fail to start. I’ll go through some of the most common causes I have experienced over the years, and hopefully it will help you get your rc car up and running again.

This guide assumes your nitro engine has good compression and is capable of running but is not starting due to either not being tuned properly, a blown plug, or some other minor problem that can be solved quite easily without having to rebuild the engine.

Is the engine or pull start seized or stuck?

This article covers an rc nitro car engine that is NOT seized – so it turns over, but just wont fire up. If your engine or pull start is seized see this article.

How old is your nitro fuel?

It is always best to use new, fresh nitro fuel, especially if you are having problems starting your RC car.

Car not starting due to old fuel is a common problem, usually with cars that have been sitting around a while. If you have left some old nitro in the fuel tank, the nitro can absorb moisture and become unusable. The engine may not to start, and if it does it may run erratically and will keep cutting out. The needle valve can become clogged which will cause the mixture settings to change.

Make sure to drain any old fuel out of the fuel tank and add new fresh fuel. Really old fuel can become sticky and clog up fuel tubes and the carb. If this happens, you can clean out your fuel tank, pipes and carb with methylated spirits or a glow engine/carb cleaning product. Fuel tubes can be replaced with new for not a lot of money.

Keep your fuel containers tightly sealed to prevent moisture getting in. Do not store in direct sunlight as this can degrade the fuel (and fuel is flammable, of course). When you do use your fuel containers, minimise the time you leave the cap off when refilling to help keep it in the best condition.

Before you try and start your nitro engine

So the first thing to do before you try and start your problematic nitro rc car is to give it a quick check over. Be sure to check all the fuel lines are connected in the correct way according to the manual, and also that there are no cuts or splits in them – an air leak will cause erratic running or may even prevent the engine from starting. Check that the fuel tank cap seals nicely when closed, and that there are no cracks or splits in the fuel tank anywhere. Check that the exhaust manifold seal isn’t leaking and the exhaust coupling is also sealed nice and tight with cable ties.

Is your Glow Igniter charged and working?

Make sure your glow igniter is fully charged and working. Test it by holding a spare glow plug that you know is good onto the end of the glow igniter. The coil should glow orange. Too many times have I been asked by a friend to look at his nitro car only to find it was just a flat glow igniter.

Check your glow plug isn’t blown / burnt out or faulty

This seems to be one of the most common reasons a nitro engine will not start.
Once you are happy the Glow Igniter works, check the glow plug that is installed in the nitro engine. To do this, remove the glow plug with a glow spanner and hold it onto your glow igniter. If the coil in your glow plug doesn’t glow up orange and you are certain that the glow igniter is charged and working, you have a blown or faulty glow plug. Find a new plug, check that it glows and then fit the new plug.

So now we know that the problem isn’t caused by a faulty or blown glow plug and the glow igniter is charged. The engine isn’t seized and has good compression (some resistance when you try to turn it over). Hopefully you have fixed any air leaks you found. After a good check over the next step is to try and start the engine.

Prime your engine and try to start it

To prime your engine, hold your finger or a cloth over the exhaust and pull the pull start  (or turn engine over with rotor start if you don’t have a pull start) several times until you see fuel being sucked through the fuel tube into the carb. There will probably be air bubbles in the fuel line at first so keep priming until these clear. Some engines will have a prime button on the fuel tank; you can push this a few times to achieve the same thing.

Note: If you can’t get the fuel to flow through the tubing there is probably a blockage in either the fuel tank, tubing or carb. This is often caused by dirt, debris or, if the car has been sitting a long time, old fuel can go solid

Once the engine is primed push the glow igniter onto the glow plug and set the throttle to around a quarter open and attempt to start with the pull start or roto start. Hopefully, after several attempts the engine should start.

If the nitro engine is flooded (unusually hard to turn over)

If you have flooded the engine (flooded means the engine block is full up with too much fuel from over priming for example) it will become very difficult to turn over with the pull start or roto start. To solve this problem you will need to undo and remove the glow plug, then turn the engine over several times. Fit the glow plug back on and try again to start the engine.

Are the Mixture settings correct?

If you are still not having any luck, try adjusting the mixture of the carb. There may not be enough fuel getting through, or too much! 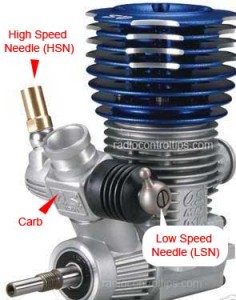 The LSN and HSN adjust the mixture of fuel and air entering the carb at low and high throttle settings. If your nitro engine was working perfectly one week but not the next, the different weather, temperature or humidity could cause your engine to run at a richer or leaner setting than it was previously tuned to, and this could be the cause of your starting troubles.

Basically, cooler air is more dense than warm air; on a cooler day your nitro car will run leaner and on a hotter day it will run richer. Usually, you should only need fine adjustments to get the car running nicely again. This is why people always complain that nitro engines constantly need re-tuning, especially in areas with diverse weather such as the uk.

If your nitro engine’s low speed needle is very lean, not enough fuel will be getting through and this could cause it not to start.

Your low speed needle adjusts the mixture for the bottom end (usually all the way up to half throttle) so this is the one that will need adjusting.

Richen the LSN by turning anti clockwise in small 1/8th increments. I think it is better to run an engine slightly on the rich side rather than too lean.

If the LSN is set too rich, this could also make the engine hard to start. You may well get the engine to start eventually but it will quickly choke up and stall.

You’ll know if it is running too rich – unburnt fuel will probably be spluttering out of the exhaust and there will be lots of smoke. It will bog down and cut out if you try to rev it.

Lean the LSN out by turning clockwise in 1/8th increments. Be careful not to tune the engine too lean as this will cause it to get too hot.