If your RC car is new it will need to be broken-in / run-in to avoid premature engine wear or damage. Break in procedure of nitro engine

If you are new to the world of model nitro RC cars then you can be forgiven if you don’t know how to start one. It’s quite straight forward providing that the rc car is in good working order. You’ll need the following items to start your nitro car.

Check-list before you begin

Before you begin, make sure you check the following points:

Ready to start the engine

Switch on your radio set and car power switch and set the throttle trim to about a quarter, or just enough so that air can get into the carburettor (carb). The carburettor should have a foam air filter fitted over it so you probably won’t be able to see the opening, but if you can easily take this off you will see the carb opening and closing when you operate the throttle. The photo below shows roughly where to set it to. 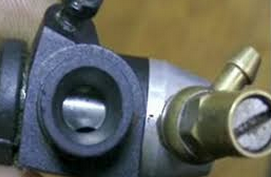 Priming the engine with fuel

First you need to prime the engine with fuel. The fuel tube that goes from the fuel tank to the engine will usually be filled with air. We need to get the fuel through the tube and up to the carburettor otherwise it will not start. 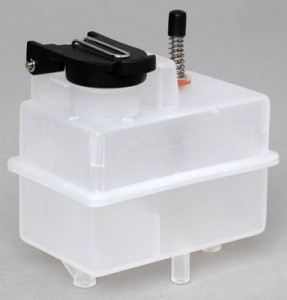 Fuel tank with a primer button to get the fuel through

Some nitro RC cars have a fuel tank with a push button (see photo above) on the top that you can press several times to get the fuel up to the carburettor. If you don’t have a button, you can achieve this by holding your finger on the end of the exhaust and turning the engine over (without the glow plug fitted) several times until you see the fuel start moving through the pipe and up to the carb.

Once you see the fuel reach the carb, fix the glow starter onto the glow plug, set the throttle on your controller to idle and then turn the engine over using whatever method you have available (Pullstart, roto / electric start / drill start / battery box starter etc).

After a few seconds, hopefully you will hear the engine burst into life. If it doesn’t start right away, check the mixture settings according to the manual and also check that the glow plug is good. Also, don’t forget to check the glow starter has plenty of power by fixing a known good glow plug into the end and seeing that it glows.